I write a lot of Python, but I wanted to get back into practice with a lower-level language. I've done a decent amount of C and C++ programming, but it seems like everyone who tries Rust really likes it so I took it for a spin.

You can find my code for this project on GitHub.

The first step was to learn a bit about Rust. I started how they recommend on rust-lang.org, by reading The Rust Book.

Next I worked through all the excellent exercises in the Rustlings Course.

Finally, I picked a couple projects:

Ray Tracing in One Weekend is somewhat like a tutorial, but it's intentionally general to allow freedom in selection of programming language and certain implementation details. It's really a great framework for non-copy-paste learning. On top of that, graphics programming is a great tool for learning a language because you can do visual debugging and get the satisfaction of making an image (as opposed to, say, calculating the Fibonacci sequence).

I was also drawn to Rust with some interest in WebAssembly (aka wasm). That was intended to be a larger part of this project, but I ended up hitting some performance bottlenecks early that made it less fun. I may revisit this because having a live demo is pretty cool, but for now I have decided to proceed with the rest of the rendering features first. Perhaps I'll write more on this later. 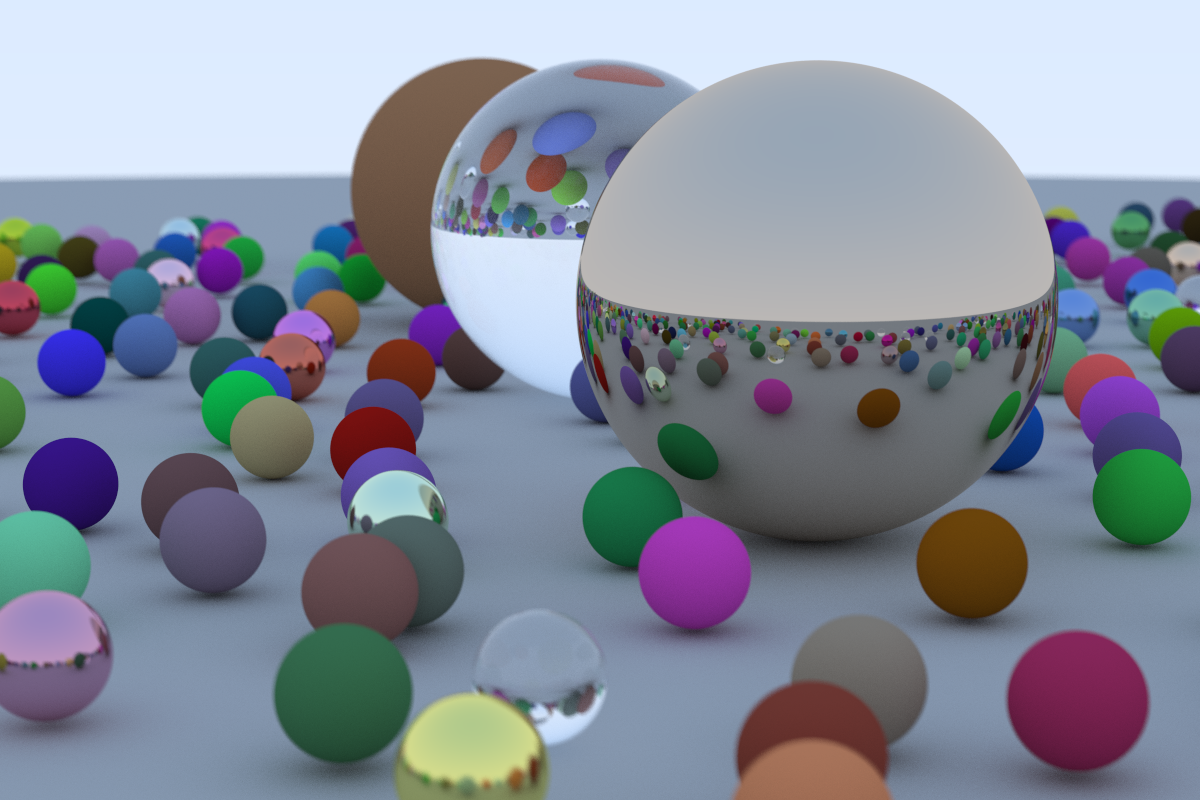 Or is it? What if we want to be able to add two of these together? An interesting thing about Rust is that you don't overload operators on a struct (which is close enough to a class for now) but for the struct.

That's neat! This is called a Trait and it is a really useful and flexible paradigm. Hopefully I can demonstrate later how this pattern encourages composition over inheritance which is something you hear often, but working with Rust has helped me understand much better. (This is the carrot; Rust not supporting inheritance is the stick.)

Something that is really neat about traits: you can implement them on types you didn't define, including standard types. That's how we can implement commutative addition with our Vec3 and floats. It's a little verbose, but also pretty clear:

Of course, you can also implement methods for the struct that don't come from any traits. Ultimately this is just allows us to call functions with foo.bar(baz) instead of bar(foo, baz) but it is handy and familiar. Implementing this way also allows eliding some of the type annotations, so the function definitions look a little nicer as well. It's also a decent way to group related functions even if they don't make use of self.

Note I did this all hard-coded for single-precision f32 values, but Rust also supports generics. I haven't really dived into that yet.

This Vec3 class could also be used for colors, but I didn't see a way to rename fields but keep the field types so unfortunately I reimplemented a lof of this for colors. I also initially started with RGBA u8 colors, but eventually reverted that as it was finicky and against the grain of the book.

That's enough for today. The next post will cover my implmentation of the rays we will be shooting into the scene.